Horror games are about putting your mind into a state where the dangers and sounds that fill their worlds feel so real and for a split second, the barrier between reality and virtual are broken as you leap, jump or scream and curl up in a ball with fear. Imscared is a pixel horror indie game created and developed by the Italian, Ivan Zanotti where you awaken in a room and you must escape a pursuer as the begin to doubt the game world and your very self as you dive deeper into the world. 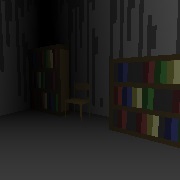 The controls are simple enough and you’ll have to crouch to recover items, such as keys, which I wish were more obviously noticeable for I spent minutes stuck at one point only to realise I had passed by the item dozens of times. This is one of the features of the game, there is no story behind it all, no reasons it seems for your actions and no instructions on how to progress. You’re simply put into the game and it is up to you to figure out how to progress but thankfully the game never leaves you feeling too lost which is a praise.

Now how can I best describe Imscared. Simply there your moving from one area to the next along the way finding the items that will allow you to do so. The design of the environments at times really suck you in, for instance the intestine rooms and how one area will change from darkness to light as you progress and the bleeding walls, which due to a good decision on the field of view being short, you’re basically heading towards the darkness and I think the developer did a good job of making this graphic design work well in a horror setting.

There are times when certain areas feel a little too bland. I think the game works well for it isn’t set in only one location, instead there are many different locations and rooms, each different from the next and diverse which make it feel like your actually progressing somewhere unlike some other indie horror games taking place inside an abandoned – (add location here).

The audio unfortunately is not as strong as it could be and takes you away from the horror experience. I understand that the game is more psychological horror but with a few ambient sounds or music cues, the game could have been taken onto a whole other level instead most of the time the only sounds are the same footsteps. Imscared sadly comes short in this area where audio, especially in a horror, is so important. 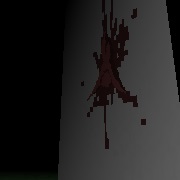 Certain areas in Imscared are unnerving.

Now to get to why Imscared is such a different experience and how the psychological aspect comes into work.

After believing I had finished the game with the message ‘The End’ before me, after a few seconds,I went ahead and closed the window but before I could choose the tab on Chrome, another one had opened in its place. One with a picture of the pursuer, looking back at me. Surely I didn’t open this did I? Then all of a sudden, ringing through my headphones was that evil malicious laugh. I almost fell out my seat as that sneaky bugger was somehow still haunting me. That’s when two messages appeared inside the folder where the game is.

One with an image. Another with a note, stating how it isn’t over yet. There are several other instances as this one and to tell you anymore would be ruining one of the best aspects of Imscared.

P – Interesting graphic design, truly plays with your mind in and outside the game, fun for a not to short or long experience.

C – Items hard to spot, some furniture to close to each other, confusing at moments.

Fear – More than making you jump, Imscared is about doing its best to mess with your mind.

Sound – Sound effects work though I wonder if any ambient music or sounds would have added more fear.

Horror – More psychological than anything, don’t expect much story besides

World – The game plays with your mind both in and out the game, as well as the pixellated aspect having a fear factor of its own.

Imscared: A Pixelated Nightmare is a horror game that will unnerve you and put you on edge, everything unfolds well so our pursuer isn’t revealed to soon, the graphic design succeeds and the game’s great use of playing with your mind. Imscared a good game to play for a while though horror fans looking for scares and constant tension and fear should look for other games.